Skip to content
When you visit a link on our site and buy something we may earn a commission.
Baby

The idea of turning a last name into a first name in your search for cute baby names is certainly not a new idea since the use of surnames as first names dates as far back as the end of the Roman Empire. As the empire began breaking down it seemed that those old royalty names were up for grabs and no longer reserved just for the nobility.

In addition, some traditional last names actually have their origins in first names. For example the last name Johnson came about as a way to differentiate John’s son from Aaron’s son so it seems only natural for these last names to become first names once again!

Most importantly, choosing a surname for a first name can allow parents to give their child a unique name or bestow on them a baby name with a special meaning. Regardless of why you may choose to use a surname as a 1st name we’ve come up with a bunch of unique last names that make even better first names for babies. 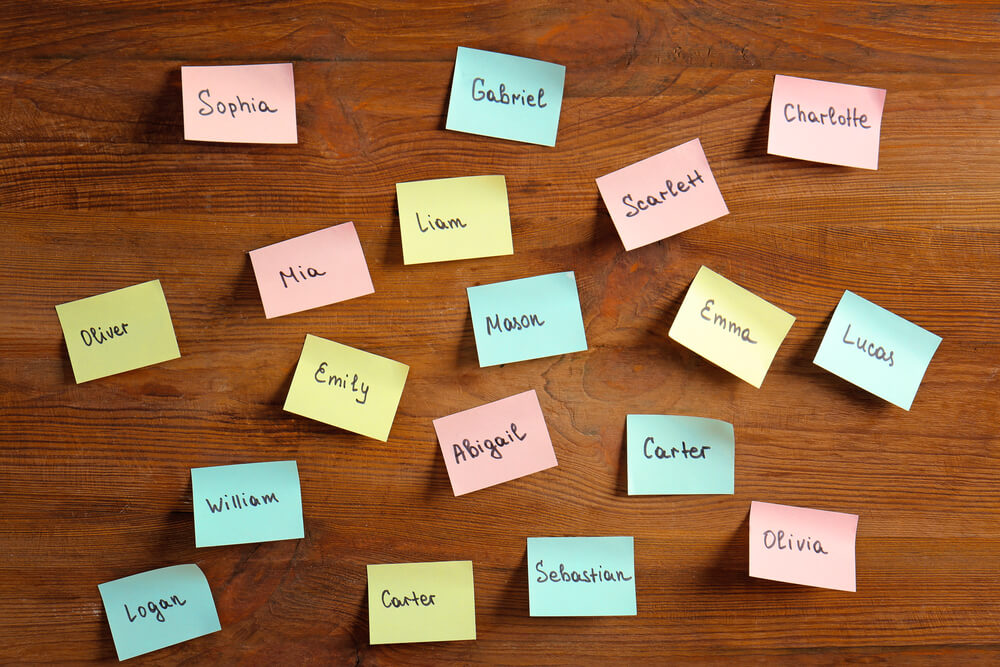 For your convenience we have divided our list of names into cute girl’s names and cool boy’s names.

One of the most Unique surnames turned into a first name for baby girls is the name McKenna is an old Scottish name from the County Monoghan where the family Mckenna was known as the “Lords of Truagh”.

As a first name the name McKenna is used exclusively for girls, however, ironically the meaning of this name means “son of the handsome one”. Newer naming books have substituted the word son in the meaning to child to make it more feminine friendly.

Another cool last name used as a first name is Quinn. The name Quinn is of Irish origin and comes from the Gaelic O Cuinn meaning descendant of Conn.

Often given as a 1st name for a girl Quinn means counsel or intelligence.

The name Reagan is an Irish name and is Gaelic the name means “king’s child”. This baby name became very popular in the United States especially for girls after President Reagan made the name a household name. It’s meaning today is “Little Ruler.”

The name Luna seems to have always been both a surname and first name, but also makes a great one syllable middle name for girls! It has origin in Rome, Italy as well as Spain. Luna was the Roman Goddess of the moon and today the name Luna still means “Moon”.

Ryan is an old Irish name that dates back to the County Tipperary in the 13th century. In most countries whfere this name is used as a first name it is given mainly to boys, however it has been a popular girl’s baby name since the 1970s and means “young royalty”.

The name Harper is of English, Scottish and Irish origin and is the occupational name for the player of the harp. The Harper was one of the most important figures in the Baronial Ball and the position was often hereditary.

As a first name Harper is most often given to girls and has the meaning “minstrel.”

Rowan is a Scottish, U.S. U.K., and Canadian surname that was extremely popular between 1840 and 1020. It also has Norse roots as well as Arabic.

The accepted meaning of the name Rowan is “Little Red One”. However, it is interesting to know that in Norse the Rowan was a tree with red berries, and in Arabic Rowan is a river in Paradise.

Ironically it is believed that Cassidy made the transition from a last name to a first name when baby-boomer parents began naming their little girls after the Grateful Dead song “Cassidy”. It’s a bit humorous to think that this name is “Dead head” name.

Peyton was originally a name for place in Sussex England and later became a famous first name for new babies due to Peyton Randolph the 1st president of the Continental Congress and later the football player Peyton Manning. Later it became more popular as a girl’s name.

Bailey is a name of Irish, English, or Scottish origin. As a first name it is usually bestowed by parents who want their child to have a unisex name.

The accepted meaning for the name Bailey is “Steward” or “sweet person” although it is believed that the Irish meaning is Legend.

Addison is a name of English origin, that is one of those surnames that started out as the first name Adam, then became a surname for the “son of Adam” and is now once more a first name.

Ironically while the name Addison means “Adam’s son” it has been used almost exclusively for females.

Riley is an old Irish name derived from the name O’Riley. It was primarily a male’s name until the 1990 when it became popularized as a girl’s name.

Riley can mean “rye field” or it can also mean “Valiant” which came from a man who died at the battle of Clontarf .

The name Arden has it’s origin in Ireland, England and Hebrew. The name Arden in Hebrew is another name Eden and means “Great Beauty”. In Celtic the term means “Lofty”

Lane is an English name that is believed to have its origins in Celtic.

It is considered a unisex name and works equally well for a boy or a girl, but we happen to feel it makes a great girl’s name. The name Lane means “Path.”

Whitney is an old English name that comes from a location in Herefordshire. It can be used for a boy or girl and means “From the white Island”.

Parents in the United States may choose the baby name Carson for their son based on the historical figure “Kit Carson” the independent frontiersman who was known for his bravery and strength. However, the origins of this name comes from the Scottish/English Borderlands and actually means “Son of marsh dwellers.

One of the most playful sounding last names for first names is the name Cooper.

The name is of Dutch and English origin and actually means “Barrel Maker” Barrel Makers played a very important role in history as most goods at one time were shipped in barrels.

Duncan is an old Scottish surname that has often become a 1st name and originates from 2 kings of Scotland. The name itself means “Brown haired man” or “Chieftain.”

Griffin is of Welsh and Irish origin where there were Welsh princes of that name. Later it was an English surname as well and now it has become an interesting first name for boys.

The Welsh meaning of Griffin is “Ruddy” while the English meaning refers to the creature that has the body of a lion and the wings and head of an Eagle.

Landon originates in Cornwall and comes from the families that lived in Langdon or Longdon.

Landon means “Long hill” and is a great name for parents looking for a unique name for their baby boy.

Parker is a last name that can be used as a boy’s first name. It has English and French origins and the name quite literally means “Keeper of the Park”.

The name is quite popular in the United States where it has been ranked the 47th most common name for boys. Part of the popularity of this name is based on its association with Spiderman.

The surname Stone turned first name has its origins in Britain and the U.S. And actually means “Dweller by the stone”. Possibly the most well known person bearing the first name Stone is the commentator Stone Phillips.

Walker is a name of German origin that dates back to the 13th century. The name literally means “Someone who walks” and is taken from a German officer whose duty it was to walk a certain portion of the king’s forest.

As a first name, the name is great for a baby boy because it has a feeling of quiet strength.

Spencer is a surname as a first name for boys that has its origin in Latin and Old French. This name means “Steward” who is a person in charge of someone’s land or property.

As a first name, the name Spencer seems to suggest trustworthiness.

The name Hunter originally comes from the Scottish kingdom of Dalriada and simply means “One who hunts or gives chase”. Given as a first name the name Hunter has a strong feel to it, which many parents like.

We also love Hunter as a cool and unique middle name for boys.

The surname Ross may be of Scottish or German Descent and has become a fairly common first name for boys. The Scottish meaning of the name means “headlands” while German meaning is steed.

Grant is an extremely strong sounding name that is of English, Irish, Scottish or French origin oddly enough in regardless of origin the name Grant means “talls or great.”

The name tanner is of German, Finnish, and English origin. The name has a different meaning depending on the country of origin.

Grayson is a family surname from Dumfriesshire near the English border. The meaning of the name means “watchful” or “Gray haired one” and when used as a 1st name Grayson has a sophisticated air to it.

Maxwell originated as a Scottish surname originating as a place name for Maccus meaning “Great” and wella meaning “Stream” with the combined meaning being “great stream” or Mack’s stream”.

The name has a strong outdoorsy feel to it, which parents who hope to instill a love of nature in their child may choose.

These unique surnames that have also become first names offers some cool and interesting names for new parents to choose from. One of the best things about choosing one of these names is that any one of the names you choose has a lot of history behind it.

Sheryl is a wife, mother and grandmother who has 3 adult children, many grandchildren and a large family with many nieces and nephews. Over the decades Sheryl has purchased countless toys and gifts for her children, grandchildren, nieces and nephews. Sheryl has an M.A. in communcations and creative writing and loves using her experience as a mother and grandmother to share information with readers. Sheryl is excited to be part of the Pigtail Pals content and editorial team!

Pigtailpals.com is a participant in the Amazon Services LLC Associates Program, an affiliate advertising program designed to provide a means for sites to earn advertising fees by advertising and linking to Amazon.com.

Amazon and the Amazon logo are trademarks of Amazon.com, Inc. or its affiliates